Skip to contentSkip to navigation
Guatemala

Education Through the Arts 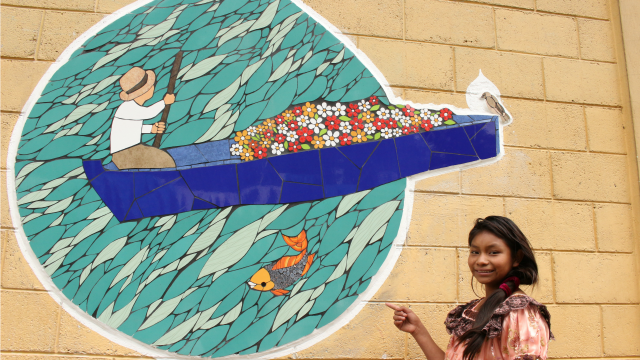 "With the help of the mural, we now feel compelled to take care of our water -- we didn’t feel that before."

In the small village of San Sebastian Lemoa, in Guatemala, lies a school where a community arts project was to be the catalyst for environmental protection education for the students as well as the inspiration for a young girl named Magdalena.

Armadillo, a local Artists Group partnering with the project, had conceptualized the idea of creating a mosaic mural outside the school, an area which had previously been neglected, in order to raise awareness about hygiene habits and water resource management amongst the community. To engage the school children in the project, they encouraged the students to draw their own designs for the mural. The final design came as a synthesis of many children. They finally were invited to assemble the mural, from cutting tiles, to gluing materials onto fiberglass, to eventually unveiling the mural.

Magdalena had taken great interest in the project since its inception. She was not only keen to participate in the construction of the mural, but was enthusiastic to learn about the important message behind the project. Through her involvement with the community arts program, Magdalena had learned about the importance of water preservation and environmental protection. She used to litter in the streets and waste water, as “nobody had ever told her not to.”

Now Magdalena proudly shows the mural to those who come through the village -- some of them even stop to take photos! For her it is a constant reminder about the need to educate and inspire people and spread her learning, starting with her family.

As a child from a disadvantaged family this collaborative arts experience has encouraged Magdalena to think over her own future. Now, she wishes to continue her studies with the dream of becoming a teacher and give back to the community.

Related to this Story

Projects — Guatemala
The Quiché Project
The Quiché Project provided access to drinking water, improved sanitation, and handwashing facilities.
News — January 4th, 2019
Project Update from Quiché, Guatemala
Up to date, 66% of the project’s final goal has been accomplished.
Url Copied
Subscribe to the newsletter!
Receive the latest news on One Drop and its activities.
Newsletter