Skip to contentSkip to navigation
Guatemala 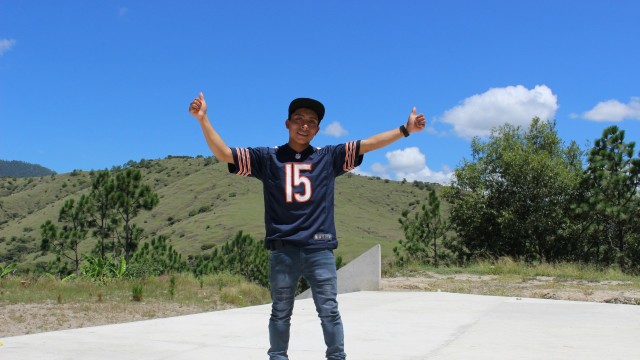 Saqueo Melchor Cor Vicente, a 17-year-old boy that became a leader after attending some of the SABC workshops in Guatemala.

Saqueo and his family – mom, dad and a younger brother – live in San Antonio Ilotenango, Guatemala, where he studies Business Administration. In 2016, Saqueo was a shy and unmotivated student, indifferent to environmental issues and proper nutrition, and had little knowledge about the importance of water, sanitation and good hygiene practices. All that was about to change.

Back in 2016, at his school, Saqueo met the crew from Caja Lúdica, one of the artistic groups supporting the SABC interventions in Guatemala. After participating in their workshops for young people about water, recreation, creativity and how to address others, Saqueo was selected to be an agent of change. He realized he had what was needed to reach out to people, manage groups and foster changes in the community. Guided by Caja Lúdica, he started replicating valuable information about water, sanitation and hygiene (WASH) in four communities: Canamixtoj, Chotacaj, Centro de San Antonio Ilotenango and Patzalá. It was not always easy but, instead of giving up, Saqueo decided to learn from every experience and persisted to achieve his objectives.

At the end of 2016, along with the 300 young people representing various national and international organizations, Saqueo took part in the Comparsa CHITIK, a parade created to dignify the culture and the various original forms of expressions from every place visited by this travelling activity; to promote intercultural dialogue and human rights; to prevent violence; and to place youth at the centre of peace building. During this event, Saqueo had the opportunity to attend training on subjects such as politics, art and culture. This unforgettable experience, as he himself recalls it, was particularly interesting because of the atmosphere, the activities, the subjects explored and the wide range of people he was able to meet and share with.

Saqueo was determined to change others for the better, as he himself had just experienced. For instance, his family diet became healthier and the way he and his family related to water was more conscious. At the beginning of 2018, with Caja Ludica’s support, he set up some classes at an institute in the urban area to conduct a 5-hour a month class about WASH. From time to time, there are not enough educational materials for the classes, but this doesn’t stop him, since he relies on his imagination and on motivated young students. He is already planning to conduct more classes in other institutes in his city. Saqueo, who was once an uninterested adolescent, is today a community leader: “I may not change the entire world, but I can change the 1% of the world that will allow San Antonio to enjoy a healthier environment,” Saqueo Melchor Cor Vicente.

Related to this story

News — January 4th, 2019
Project Update from Quiché, Guatemala
Up to date, 66% of the project’s final goal has been accomplished.
Url Copied
Subscribe to the newsletter!
Receive the latest news on One Drop and its activities.
Newsletter