In the Yhu district of the Caaguazu Department, 700 people now have improved access to safe water and sanitation services. The new system was provided by SENASA (National Environmental Sanitation Service), a government agency that builds and improves water and sanitation infrastructure and carries out capacity building, as part of the Access component of the Y Kuaa project in Paraguay. Y Kuaa is part of the Lazos de Agua Program, of the IDB, The Coca-Cola Foundation, Fundación FEMSA and One Drop.

The new water and sanitation system guarantees water supply to the inhabitants of Yhu 24 hours a day. This infrastructure is composed of both a conventional supply system and 139 sanitary units (bathrooms with hydraulic drag). This system will be administered and operated by the local Sanitation Board, Mariscal Lopez-Virgen del Carmen, which participates in the process of institutional strengthening led by the Moises Bertoni Foundation, executing partner of Y Kuaa.

On February 23rd, the Moises Bertoni Foundation accompanied 42 communities in the district, for the creation of the Water Service Providers Association of Yhu. This association gathers the Sanitation Boards and the Water Commissions of the area, and supports them through the provision of various services such as accounting or wholesale purchase of inputs. This association also strengthens the Board members' capacities and represents them opposite entities such as SENASA or local or departmental institutions.

Find more information, about the new drinking water and sanitation system, and the Water Service Providers Association of Yhu, in Spanish:
New water and sanitation facilities will benefit more than 700 people in Paraguay.
One more step in institutional strengthening in Y Kuaa. 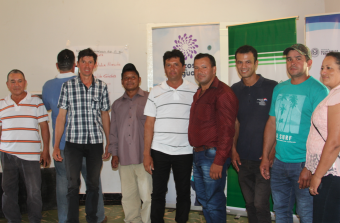 Members of the board of directors of the Water Service Providers Association of Yhu. On the right, Obdulia Almada and Pablo Báez (third from right to left).