Skip to contentSkip to navigation
Americas

The story of a community coming together for a healthy future 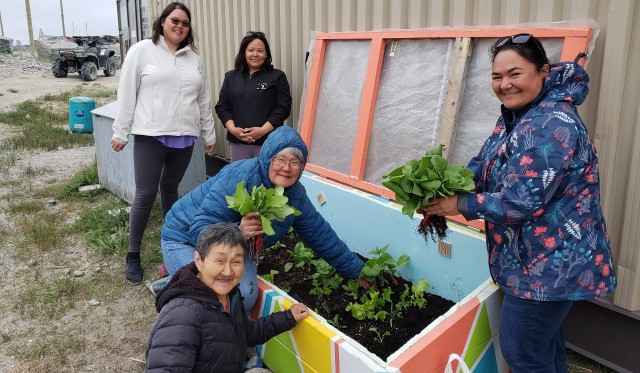 The following story, from the Pirursiivik Project, is about community members increasing their families’ access to healthy foods by finding new ways to grow vegetables in a northern climate, including hydroponics using water instead of soil.

THE STORY OF A COMMUNITY COMING TOGETHER FOR A HEALTHY FUTURE

Inuit communities of Nunavik, including Inukjuak, are connected to the rest of the province of Quebec in Canada only by air and by sea. Store-bought food represents 80% of Inuit dietary intake and is imported either by ship in the summer or by cargo flight year-round. This impacts freshness, availability and, of course, price. Permafrost and climate limit the communities’ ability to develop agriculture.

But that doesn’t mean Inukjuammiut weren’t ready to try.

A community-led process, supported by Makivik Corporation and the One Drop Foundation, identified the potential of cold frames (greenhouse boxes) to extend the growing season. Between 2019 and 2020, seven cold frames were built in collaboration with several organizations, including the school’s environmental club, the men’s association and the food centre. The project team offered support and workshops, which aroused a lot of enthusiasm and interest among community members, who gained confidence in their ability to include more fresh produce on their plates. Locally inspired motifs painted on the exterior of the cold frames made them stand out in the entrances of the various host organizations and also protected them from vandalism.

Over the 2020 growing season, each of the boxes grew over 22 kg of mixed fresh produce. Community organizations harvested and used these greens to make exciting recipes from stew to sushi and shared these benefits by including them in their programs. Each organization was responsible for planting, watering and harvesting their cold frame, and community members participated in everything from planting seedlings to sharing the final dishes. While the size of the growing spaces is currently limited, this process has created a team of motivated local gardeners, ready to take full advantage of a larger space and a longer growing season.

The long-term objective of the Pirursiivik Project is to build a sustainable greenhouse to grow produce year-round. While plans are coming to fruition, the complex process to ensure the project’s long-term sustainability limits the immediate benefits for the community. But for right now, these cold frames have provided access to both learning spaces to improve techniques adapted to the climate and growing spaces to begin enjoying the benefits of fresh local produce.

Inukjuak is not done yet, as a new hydroponic system offers additional growing possibilities over the coming years, using water as a transformational force to grow produce efficiently despite the challenging environment. Detailed plans and fundraising efforts have begun to expand the infrastructure to a community food centre and a year-round greenhouse, a first of its kind in Nunavik.

Stories of Change — September 29th, 2021
Africa — The story of Pascaline
The following story is about being proud of your contribution to a team. It is not just about keeping a space clean.
Url Copied
Subscribe to the newsletter!