Skip to contentSkip to navigation
Knowledge 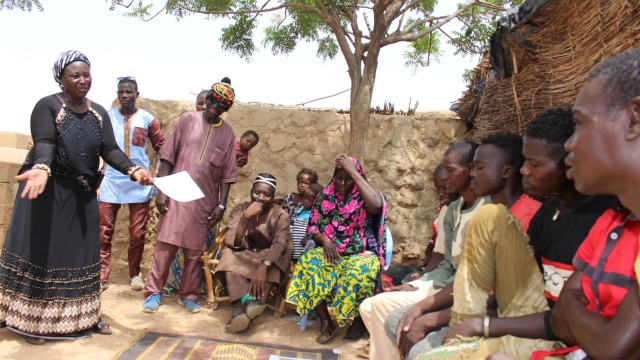 Despite the prevailing climate of insecurity in the northern region of Burkina Faso, targets of the Water and Sustainable Economic Growth Project in the Sahel (ECED-Sahel) were surpassed. At the end of its implementation in late 2019, 76% of the 2,093 surveyed households used latrines, compared to 1% at the start of the project (1). This remarkable success is the outcome of combining two complementary approaches that supported communities to end open defecation: Community-Led Total Sanitation (CLTS) and One Drop’s Social Art for Behaviour ChangeTM (SABC).

Open defecation is a threat to public health and safety, especially for women and girls, and it undermines people’s social and economic well-being. In 2016, when the ECED-Sahel Project was launched, open defecation was a common practice in the rural communes of Gorom-Gorom and Falagountou in Burkina Faso. The ECED-Sahel Project, which was implemented by CowaterSogema International and co-financed by Global Affairs Canada, the IAMGOLD mining company, and the One Drop Foundation, focused on supporting sustainable economic growth in these two Sahelian communes. The project centered on water, sanitation, and hygiene (WASH) as levers for development, supporting income-generating activities, changing behaviours, promoting gender equality, and reinforcing local governance.

COMMUNITY-LED TOTAL SANITATION - WHAT IS IT ?
CLTS is a participatory approach used to challenge communities on their practice of open defecation. Through a series of interventions, CLTS provokes strong emotions such as shock, disgust or embarrassment that triggers awareness and a collective commitment to ending open defecation (2). Then the community decides to build latrines with the means available to them. The first contact with the two communities was through a communication campaign run by the commune authorities, which rallied traditional and religious leaders and residents in each village to get involved in future CLTS activities. This campaign acted as the catalyst for the population’s support for ending open defecation and led to its commitment to building sanitation solutions that served the needs of 21,500 people at home. This is equivalent to 41% of the population of the communes of Gorom-Gorom and Falagountou (1).

Despite the fact that latrine building was well on track, 36% of the latrines built were not being properly maintained by households after 18 months of implementation of the CLTS approach, and handwashing with soap at critical times was not being observed (1). When consulted, new latrine owners pointed to a number of obstacles that prevented them from systematically using their latrines and properly looking after them and washing their hands. These obstacles included unpleasant odours from poorly maintained latrines, a weak understanding of contamination pathways, and the perceived lack of risk in failing to wash hands after using a latrine or before eating. To address these observations, the ECED-Sahel Project introduced the SABC approach in a synergistic way to complement CLTS. While CLTS brings community members to abandon a behaviour - in this case open defecation - and build toilets, SABC interventions trigger the uptake of WASH behaviours such as systematically using the toilets, maintaining them clean and washing their hands with soap and water.

SOCIAL ART FOR BEHAVIOUR CHANGE - WHAT IS IT ?
The SABC approach is a participatory process that taps into a community’s artistic and cultural heritage to co-create interventions such as theatre-debate, murals, songs and dances that embed behaviour change messages. Participants then become the protagonists of their own behaviour change through their growing participation in creative processes in which they are the main actors.1 Activities are designed and implemented by, with and for them. (2) In the context of this project, SABC was woven into the CLTS process, amplifying and providing complementary messaging: While CLTS focuses heavily on ending open defecation, the SABC approach promotes the sustained adoption of a broad set of WASH behaviours.

FINDINGS
By the end of the project—that is, after 30 months of using the two synergistic approaches —98% of the latrines were being properly used and maintained and at least 16,000 people had adopted handwashing with soap at critical times, thereby surpassing the end-of-project target of 12,000 (1). Beyond the effective sequencing of the dual approaches (CLTS was implemented first and before ending its interventions, SABC was introduced to the community following a sequence of steps which made the merging of both approaches more natural), several factors contributed to the success of the project. Community leaders were involved from the design phase of the activities. The villages’ development councils made themselves available to the communities and handled the local organization and communication around the project’s activities2. Drawing on their values and beliefs, religious leaders supported the project’s messaging on personal and home hygiene. Local change agents and leaders including artists, teachers, and health promoters influenced and served as role models to their cohorts. In addition to ensuring the communities take a leading role in their own behaviour change process, CLTS and SABC shared a core value of leveraging the power of emotion to foster engagement. While CLTS elicits disgust to trigger the community’s commitment to end open defecation, SABC participative and creative processes, such as murals, music3, storytelling, theatre, dance, and radio drama, incite joy and pride to boost behaviour uptake.

SUCCESS FACTORS
The final success factor lies in leveraging collective intelligence as a catalyst for sustainable actions. This can be achieved through constructive discussions that allow different points of view to be expressed, thereby exposing taboos related to open defecation, and latrine use and maintenance, as well as contributing to collective thinking to identify and implement solutions jointly. The people of Falagountou and Gorom-Gorom have now equipped themselves with latrines, embraced their use and maintenance, and have adopted the practice of handwashing with soap and water at critical times—all thanks to frequent and consistent messaging from local leaders and the complementary use of CLTS and SABC. The successful outcomes of this pilot project seem encouraging for replicating the experience, and open opportunities in other WASH challenges.

REFERENCES
1. Cowater Sogema. Rapport de fin de projet. 2020.
2. Kamal Kar, Robert Chambers. Manuel de l'ATPC. 2008.
1The SABC approach was implemented under the ECED-Sahel Project with the technical support of the Espace Culturel Gambidi.
2The priority group consisted of the populations of the two communes and the beneficiaries of the facilities in particular.
3For example, the use of the goumbé and a traditional locally made guitar.

Learn more about this project
The ECED-Sahel project: Water and sustainable economic growth in the Sahel region
104,000
Targeted population
4 years
2016 to 2020
Sahel Region Burkina Faso
See what is happening : Sahel Region
Would you like to stay connected?
Subscribe to the newsletter

News — March 20th, 2020
Soap and water are needed. So is behaviour change.
If handwashing with soap has been proven to be one of the best preventative life-saving measures, two in five health care facilities do not have water or soap.
Url Copied
Subscribe to the newsletter!