Skip to contentSkip to navigation
Africa

The story of Fatimata, artist and "playmaker" 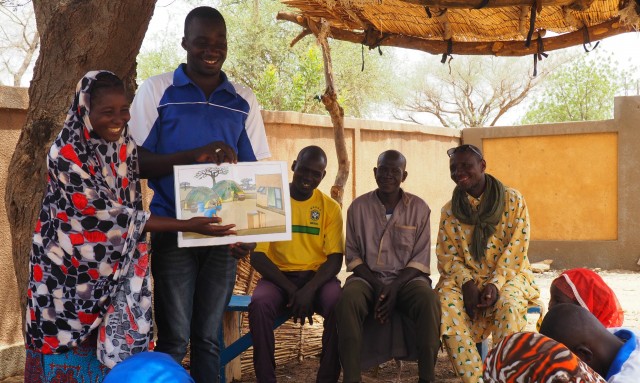 This is a story about LEADERSHIP.
It’s more than just the story of an artist. It’s the story of a woman’s determination to inspire others and to capitalize on positive change.

Fatimata Maïga is a housewife from the village of Falagountou, in the Sahel region of Burkina Faso. She is the sole provider for her five children and her mother; in order to support them, she works on awareness-raising activities centred on women’s development.

At each meeting, she addresses the issues of diarrheal diseases and open defecation—a practice in which she takes part as well (albeit not without shame) since she has no latrine at home.

But Fatimata’s story is about to change.

Despite the dismissal and even scorn she faced from other women in her village who thought artistic activities were only for the lazy, Fatimata decided to participate in setting up a theatre troupe as part of the ECED-Sahel project for sustainable water access and economic growth, which was co-funded by One Drop. As an artist herself, Fatimata took on the role of “playmaker”, a role that is traditionally reserved for men.
This new artistic mandate, and the challenge she’s given herself to educate those around her, now allow her to inspire her entire community and to actively promote change. The compensation she receives has allowed her to get involved in small business and to make her goals realities: she bought a freezer to make and sell ice cubes, she is setting up a soap-making company, and she had a latrine built in her house.

Theatre performances and storytelling allow community members to share their messages. As of today, Fatimata’s messages have been heard throughout six different communities. She is asked to speak about positive behaviours around water in households, she manages a variety of income generating activities, and she has inspired relatives and neighbours to build latrines as well. “Thanks to social art, I am now a respected woman; when I speak, my message is heard. I know that I can’t bring my whole community to radically change their behaviour all at once. But I also know that gradually, they will, because what we have already seen, what we are seeing today, reassures us that this is where we are heading.”

To date, One Drop and our partners have changed the story of almost 180,000 people in Africa.

Let's change the story. Together.