Skip to contentSkip to navigation
Africa

The story of Zourata, entrepreneur and leader of change 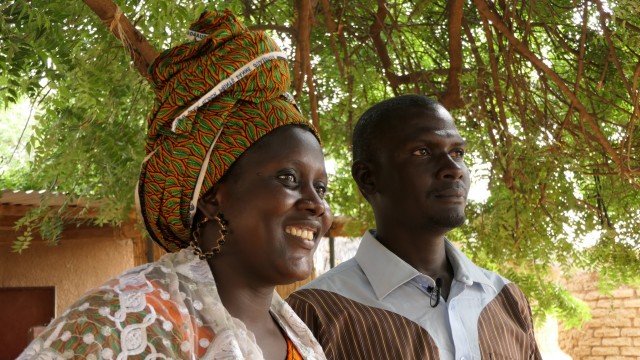 This story is about the power of WOMEN’S LEADERSHIP.
It is more than just the story of a mother from a poor rural village who has benefitted from one of our projects. It is the story of a woman’s determination to empower herself and others around her, and to bring about real change in her community.

Zourata Maïga is nothing less than a powerful Leader of Change. Under her leadership, the women of the Bonkani cooperative, Burkina Faso, became a shining example of female entrepreneurship in the region (“bonkani” means “lucky” in the local dialect). Her path to leadership was not without obstacles; after reaching high school, Zourata was forced to abandon her studies due to a lack of economic resources.

The mother of a young child, Zourata was not yet aware that her and her community’s stories were about to change.

The story of the Bonkani cooperative began in 2016, when 30 or so community women came knocking at Zourata’s door, needing her help. These women were former artisanal gold miners who had decided to abandon the practice due to low revenues and growing insecurity.

They wanted to work in livestock fattening, one of the main economic drivers in the Sahel region, and since setting up a cooperative required registering with the district, the women asked Zourata to help with the administrative hurdles. She successfully helped them secure a credit union loan of more than two million CFA (approx. US$3,400). However, sheep fattening did not initially go well. In the first year, many of the sheep died, since the women did not understand how to monitor the animals’ health. “But we are proud and strong women; we wanted to find a solution and make this work!” explained Zourata. The women in the Bonkani cooperative turned to the ECED-Sahel Project financed by One Drop, Global Affairs Canada, and IAMGOLD. Specialists helped train them and put them back on the right track. “After just three months, we were well on our way!” said Zourata. The women were able to successfully fatten their animals and sold four times more sheep than ever before. Income from the women’s business activities has increased their families’ quality of life and improved the women’s status within their community.

With financial support, revenue-generating initiatives can create a powerful ripple effect that leads to sustainable development for rural communities. When asked what makes Zourata such a powerful agent of change for women and the community as a whole, the ECED-Sahel Project manager in charge of economic development mentioned her natural sense of leadership, her faith, and her ability to create an environment of mutual trust among women in her community. Ultimately, Zourata’s story is about what can happen when women are empowered as drivers of social and economic change.

TO DATE, ONE DROP AND ITS PARTNERS HAVE CHANGED
THE STORY OF MORE THAN 100,000 PEOPLE
IN BURKINA FASO’S SAHEL REGION.

LET’S KEEP CHANGING THE STORY.
TOGETHER.