Pirursiivik: Water, Art, and Community as Drivers of Development 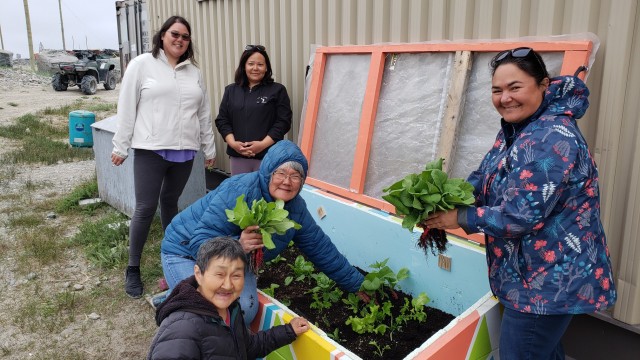 The Pirursiivik project is the fruit of a partnership between the One Drop Foundation, the Makivik Corporation, the RBC Foundation, and their common desire to improve living conditions for community members living in the northern village of Inukjuak (Nunavik, Quebec). Many local and regional collaborations emerged as a result, all with the goal of reducing inequalities experienced by people in the region. In addition to taking an active role in health- and nutrition-related social art activities and skill building, 1,500 community members engaged in dialogue on water, the environment, and adapting to climate change. Over four years, the Pirursiivik project has helped grow stronger, healthier, and more sustainable communities.

Hydroponics: a food security solution for the Arctic
Between June and November 2021, a hydroponic container (a shipping container converted into a hydroponic greenhouse) was installed and then grew some 1,048 products—including kale, lettuce, sorrel (qunguliit), spinach—totalling nearly 108 kg of produce.

The implementation of and training for these food production systems have helped several local organizations become more food resilient and make food autonomy gains, all the while growing their skill set. More testaments to the success of this initiative include the Sirivik Community Kitchen’s involvement in the operation of the hydroponic container, as well as the bountiful harvests collected by participating schools, the Sungituivik family home, and the SIPPE House.

Art as a driver of community engagement
Since Day 1 of Pirursiivik, the relationship between art and hydroponics has been one of symbiosis.

A wide range of social art activities—a plant growing contest, building and decorating cold frames, name-that-traditional-plant activities, the community kitchen, the artistic endeavours of Tupiq ACT (the first social circus troupe in Nunavik), and so on—facilitated knowledge sharing in the realms of water, nutrition, animals, and plants, including the species being grown in the hydroponic container.

Tupiq ACT had the opportunity to create and present a multidisciplinary show, as well as a social intervention film entitled Tupituqaq, which was centred on the transfer of traditional knowledge and the promotion of healthy water- and nutrition-related habits.

Pirursiivik also enabled the development of a book cataloguing traditional plants in Inukjuak and an educational kit to spark discussions between Nunavummiut primary and secondary school students. Designed to draw connections between the Tupiq ACT show, social art, traditional Inuit knowledge and skills around medicinal plants, as well as cooking and gardening activities, the kit will be utilized by targeted Nunavik classrooms starting September 2022.

Intergenerational traditional knowledge sharing
Pirursiivik has proven that social art—when used in the context of intergenerational activities and in close collaboration with Indigenous youth—is a powerful tool for adapting to climate change, promoting balanced nutrition, and building a healthy relationship with the environment.

The learning-based and hydroponics-related activities also highlighted the importance of forging links between traditional knowledge and Western technology to foster sustainability and resilience.

The momentum for community sustainable development
The Pirursiivik project has been an opportunity to build a relationship of trust and cocreate initiatives with the Inuit community of Inukjuak while introducing new methodologies for and ways of directly engaging with community members on critical issues around water and health.

The fruitful collaboration with Tupiq ACT throughout this project has also underscored the great potential that lies in using social art to work with Indigenous artist and young people, create spaces for dialogue and creativity that are dynamic as well as inclusive, and bolster ties between communities and the environment.

The success of this partnership with the community of Inukjuak has created momentum that the One Drop Foundation will use to develop future initiatives—ones that harness the power of art to support the First Nations, Métis, and Inuit peoples in Canada. Building on the success of the Pirursiivik Project, One Drop Foundation's Youth & Water initiative will be the cornerstone of our new programming promoting sustainable water access, food security and community engagement in multiple regions in Quebec, Ontario, Alberta, and British Columbia.

News — April 6th, 2022
Artists are mediators of social change and must be involved in building resilient systems
Resilient water, sanitation and hygiene systems must go beyond building or rehabilitating water infrastructure. Art and artists have a fundamental role to play.
Url Copied
Subscribe to the newsletter !
Receive the latest news on One Drop and its activities.
Newsletter